Annapurna Region offers some of the most dramatic scenery in the world with trekking routes to suit all seasons and levels of fitness. Our bike route follows the two major river valleys (the Kali Gandaki and the Marsyangdi) and popular trekking trials through Manang and Jomsom.

Starting from Besi Sahar in the fertile middle hills, the route passes through Hindu Villages. An outstanding variety in the cultures and landscape can be seen along the route. Through a series of formidable gorges the trial takes to the upper Annapurna regions where the houses have Tibetan-style flat roofs and the Manangi men and women wear the Tibetan chuba. Here almost everything is Tibetan except the spoken language.

Manang is a beautiful remote district consisting mainly seven villages - Manang, Braga, Pisang, Ghyaru, Ngawal, Tenki and Khansar. Each of these villages offers you most amazing views of great Himalayas so near that your eyes won't believe it. These villages lie in the heart of Himalayas, encircled by magnificent mountains like Annapurna range, Gangapurna, Pisang peak, Lamjung Himal, and many more. The elevation and rock-cliff alongside the trail and the huge never-ending Marshyangdi River makes this place more thrilling. There are historical monasteries, which reveal the backgrounds of Buddhist religion.

The trial takes over Thorong la pass (5416m), passes through 'Muktinath', a popular pilgrimage site with 108 water spouts, for both Hindu and Buddhist. The route continues through a major market, 'Jomsom'. Since the early 1970s this town has been the capital of Mustang district. The increasing frequency of the flights to Jomsom has brought more tourists to this area.

The Annapurna circuit tour is completed after entering into the Pokhara District. Ride through a busy city, Beni and enter into a beautiful tourist city, Pokhara. We spend a day in Pokhara to explore its beautiful landscapes. 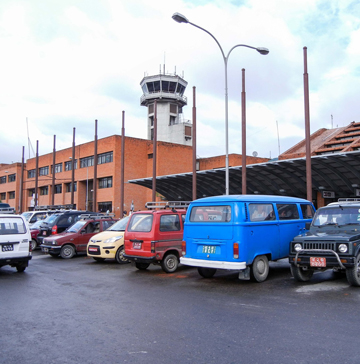 Meet, assist upon arrival at Kathmandu airport by our representative & escort to the hotel. Rest of the day will remain at leisure to browse around the area.
Overnight at the hotel in Kathmandu.
Kathmandu
In the morning, the passports will be collected by your guide in order to make the trekking and biking permits. Since this day is free, you may take this day for further preparation or visit to Kathmandu Durbar Square, Patan Durbar Square and Boudhanath Stupa to explore the cultural heritage of Nepal.
Overnight at the hotel in Kathmandu. 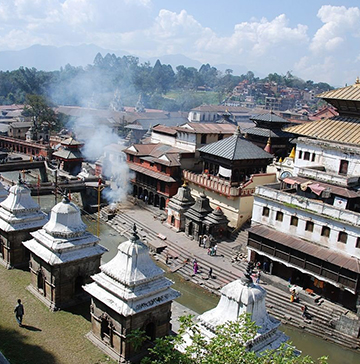 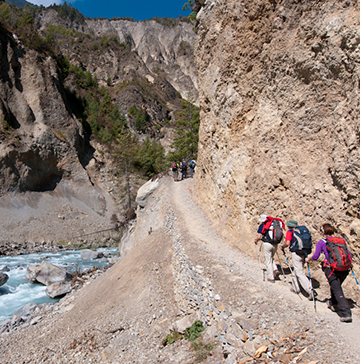 Kathmandu – Besi Sahar
After having leisurely breakfast, start driving towards Besi Sahar, the starting point for your biking trip. Preparation for the tour. Arrange Porters, Equipments etc.
Overnight at the lodge.
Besi Sahar to Bahundanda
The road heads north to Besisahar is being pushed through the Ngadi, for transport vehicles for hydroelectric project in the area. So far only a rough jeep track has been made as far as opposite of Bulbule. Soon, as we cross long suspension bridge, there is ACAP check post where we have to show the biking and trekking permit. Ride up to the long suspension bridge over the Ngadi Khola and skirt around the conical hill to begin the ascent to Bahundanda (Brahmin Hill) passing through terraced fields. After the bridge the steep hot climb up to the cliff of Bahundanda where we can have some fresh air and spectacular views.
Overnight at the lodge. 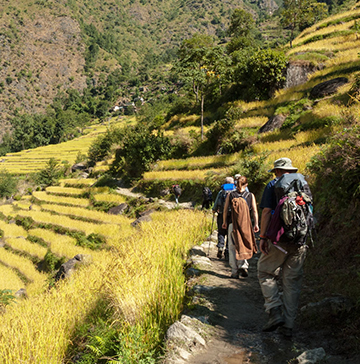 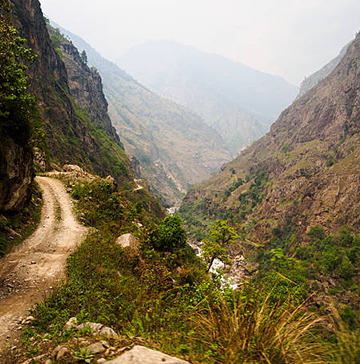 Bahundanda to Taal
We descent 500 m steep down hill. Have superb view of waterfall. Today we won't be able to ride much, mostly carry and push. The wide valley has now become a narrow gorge with the river thundering through it. There are steep drops beside the path in some places. It's long hot climb up to the Taal (lake), the district border of Manang and Lamjung, Stoned houses with flat roof, further less vegetation and many other differences from Lamjung district from the view point of culture, architecture and climate are marked as we ride further ahead.
Overnight at the lodge.
Taal to Chame
Leaving Taal, reach a mani wall in the middle of path. Always walk to the left of Buddhist shrines monuments. Pass the field of maize, barley and potatoes and the valley gets narrow again. The Dharapani village apporached through stone gateways, characteristic of all villages in Manang across the narrow gorge loom high cliffs. From Tall till Dharapani the condition of the trail is not so favorable for riding, mostly carry and push. The trail gets more ride able from Dharapani passing by Bagarchap, Tanagyung, Latamrang and Koto. Biking and trekking permits are checked in the Police check post at koto. A large white gate with a corrugated iron roof marks the entrance to Chame. It's the district headquarter of Manang. Later, enjoy hot spring at the other side of the Marshyangdi River.
Overnight at the lodge. 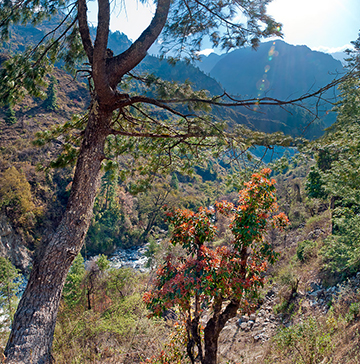 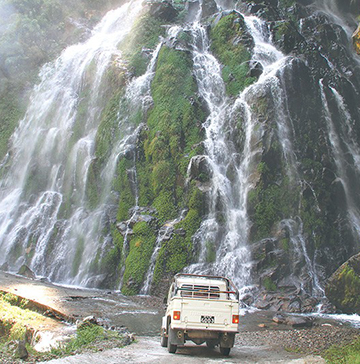 Chame to Manang
Today, most of the time you can enjoy riding as the trail takes through deep forest in a steep and narrow valley.Cross the river through long bridge at 2910 m. and then another bridge at 3040m. The trail to Pisang continues along the river through Keleku to Bhratang (2850m) which is surrounded by apple orchards and has a number of lodges.
From upper Pisang the route roughly follows the contours of the land until you reach a wall of prayer wheels and mani stones. The trail is not clear up to here and there may be more obvious goat tracks. The route takes through Ghyaru (3670m) and Ngwal (3657m) to reach Manang. The ride is now through the drier upper path of the Manang district.
Overnight at the lodge
Rest day in Manang
Take rest at Manang , the largest village and the best place to rest for acclimatization. The views of the Annapurnas, Gangapurna and the glacial lake below it are spectacular. From Left to right the peaks are Lamjung, Annapurna II, Annapurna IV,
Overnight at the lodge 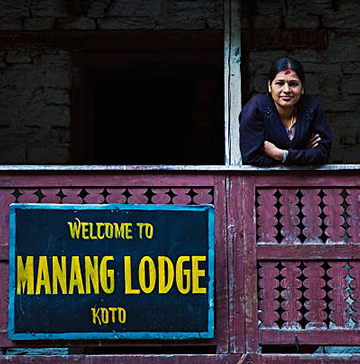 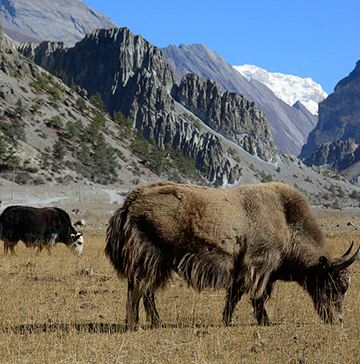 Manang to Thorong Phedi
The trail climbs steadily through Tengi valley, leaving the Marsyangdi Valley and continuing along the Jarsang Khola Valley. A Hard climb follows to Khusang (3900 m). Beyond Khusang, passing through Yak Kharka which means yak pastures. True to the name grazing yaks are to be seen around this area, and across the river on the mountainside. Pass through Ledar (4200m) and reach Thorung Phedi, literally meaning 'The foot of the Thorung La (5416m). The vegetation becomes steadily sparser as we carry on ahead.
Overnight at the lodge.
Thorang Phedi to Jomsom
Start very early in the dark as the trail gets very windy and very difficult to pass Thorung La pass. It takes almost 4 hours to reach the top and its 100% carry throughout. This is the most difficult trial and the highest pass of the whole tour. The trail begins with the descent of very steep slope for approximately 45 minutes then the normal ride able route starts to take the way to Jomsom. Ride through rough narrow down hill and small valley, descending to the stream and climbing across the far slope and reach Jomsom a major market having an airfield with daily flights by plane or helicopter to Pokhara and Kathmandu.
Overnight at the lodge. 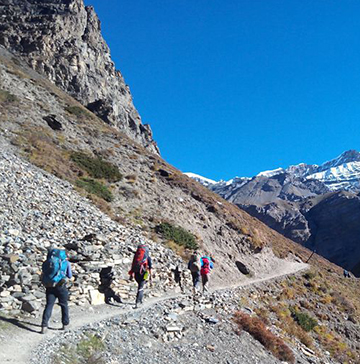 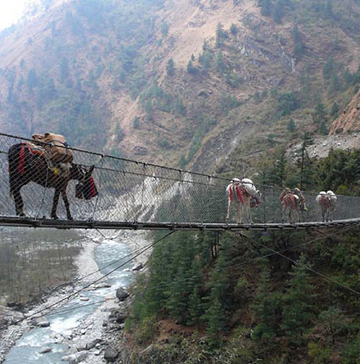 Jomsom to Tato Pani
Ride through Marpha village. It is very popular for Apple farming. Then pass through village Khobang which offers spectacular views of mountains on this stretch. A long ride will take us to the village Kalo Pani (2530m) at the northern end and Lete (2480m) to the Southern end. After Lete village, steep ride through forest will take to the Lete Khola (river). Ride through suspension bridge crossing the river at 1935m and at one stage ride through a very steep and narrow section of a gorge. The route gradually takes down to Tato Pani, a busy population centre. Tato means 'hot' and pani is 'water' a name earned courtesy of the hot springs by the river.
Overnight at the lodge
Tato Pani to Beni
From Tato Pani, paddle and cross the bridge to the eastern side of the kali Gandaki (a major river) and shortly afterwards the bridge over the Ghara khola (river). Passing the trail up to Ghorepani, continue south along the Kali Gandaki the trail rises and falls through small villages. Under an hour's ride from quieter and far more attractive riverside village, Tiplyang (1040m) the trail takes to the bustling market town, Beni. Buses run along the east bank road to Baglung and on to Pokhara.
Overnight at the lodge 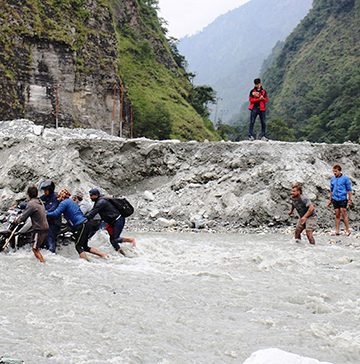 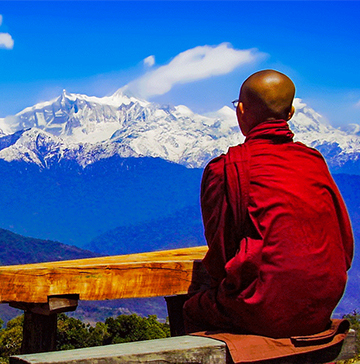 Beni to Sarangkot
After breakfast we will follow Kali Gandaki River and reach the Baglung highway which will lead us to Naudanda where we will have lunch. We follow the road to the Sarangkot which is one of the view point in Pokhara to enjoy the view of Mountains, Himalayas, sun rise, sun set and the Lake.
Overnight at the lodge
Sarangkot to Pokhara
Mostly we ride through steep and small road to Pokhara. Make sure to check your brakes before you start for about 90% down hill ride. Reach Pokhara and further to your hotel to check-in.
Overnight at the hotel in Pokhara. 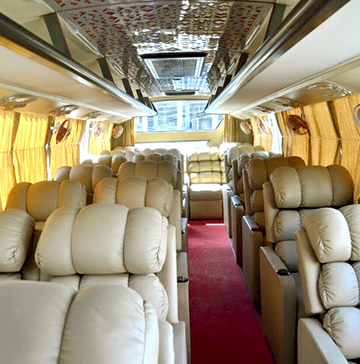 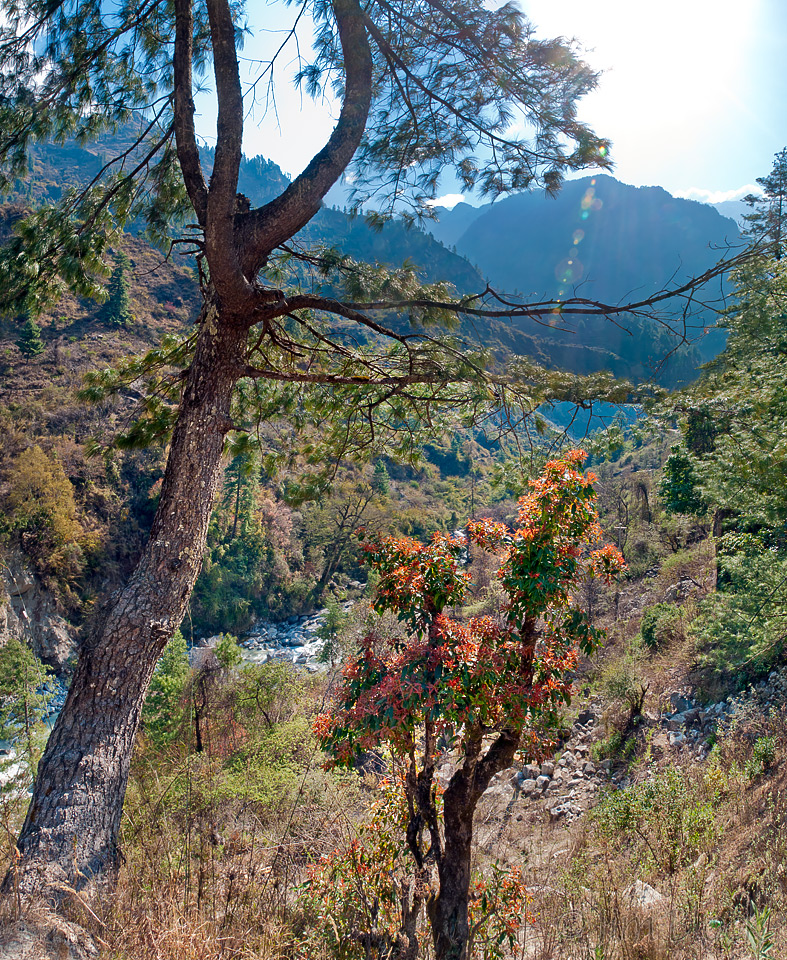 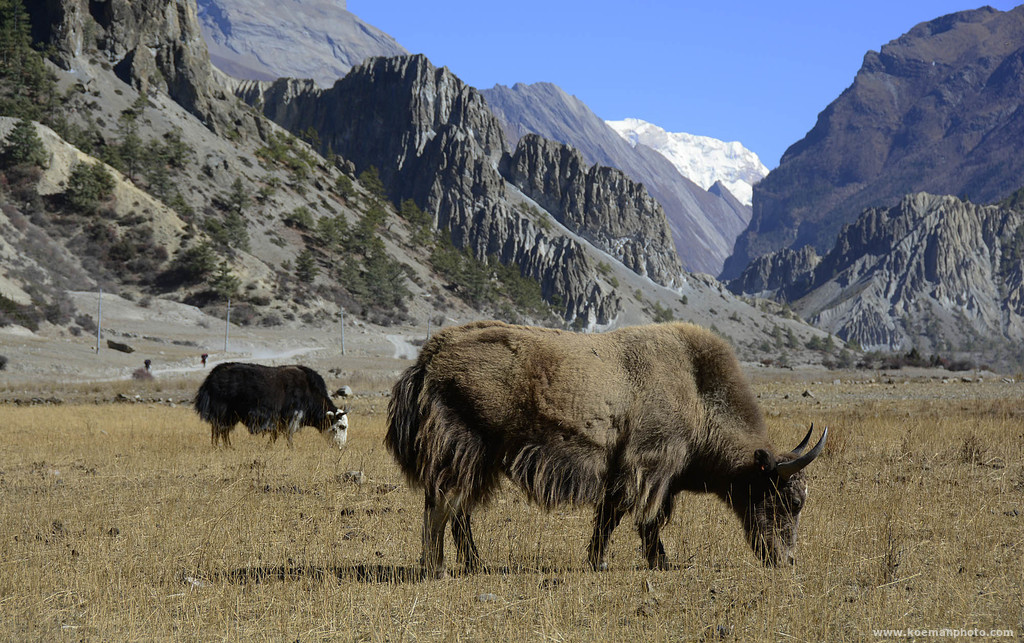 Biking trip from Jomsom to Pokhara