In Nepal, the majority of people identify as Hindu and is the largest religion of Nepal. More than 81.3 percent of the Nepalese people identified themselves as Hindus. The Hindu population in Nepal is estimated to be around 22.1 million which accounts 81.3% of country's population. The national calendar of Nepal, Vikram Samvat, is a solar Hindu calendar essentially the same to that widespread in North India as a religious calendar, and is based on Hindu units of time.

The geographical distribution of religious groups revealed a preponderance of Hindus, accounting for at least 87 percent of the population in every region. Among Tibeto-Burman-speaking communities in Nepal, those most influenced by Hinduism are the Magars, Sunwar, and Rai peoples.

Historians and local traditions says that a Hindu sage named "Ne" established himself in the valley of Kathmandu during prehistoric times, and that the word "Nepal" means the place protected ("pala" in Sanskrit) by the sage Ne. He performed religious ceremonies at Teku, the confluence of the Bagmati and Bishnumati rivers. According to legend, he selected a pious cowherd to be the first of the many kings of the Gopala Dynasty. These rulers are said to have ruled Nepal for over 500 years. He selected Bhuktaman to be the first king in the line of the Gopal (Cowherd) Dynasty. The Gopal dynasty ruled for 621 years.

Our English speaking representative will receive you upon arrival at Tribhuvan International Airport in Kathmandu and transfer to the hotel. Check-in at the hotel and remaining time will be at leisure OR to take a stroll to the surroundings on own. 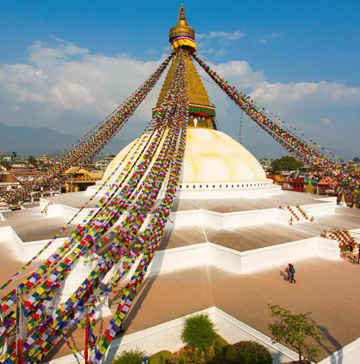 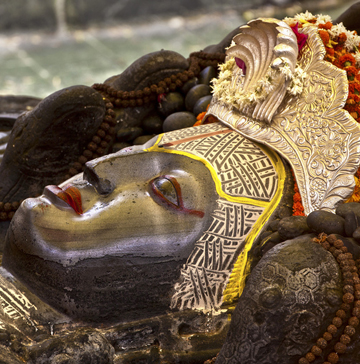 After having breakfast, start your tour and proceed towards Budhanilkantha, also known as the temple of sleeping Bishnu, Pashupatinath temple & Patan city, also known as city of fine arts and temples.

Budhanilkantha Temple, is a Hindu open air temple dedicated to Lord Vishnu. Budhanilkantha Temple is situated below the Shivapuri Hill at the northern end of the Kathmandu valley and can be identified by a large reclining statue of Lord Vishnu. The temple's main statue of Budhanilkantha is considered the largest stone carving in Nepal. According to myth, a farmer and his wife once struck a figure while ploughing the field, which caused the soaking of blood into the ground. This turned out to be the figure of the lost deity of Budhanilkantha, which was recovered and placed in its present position.

Pashupatinath temple: One of the most sacred Hindu shrines in the world, Pashupatinath lies in the bank of river Bagmati. The two-storied pagoda houses a sacred lingum, or the phallic symbol of Lord Shiva. Although the temple dates back to the 4th century, it was brought into its present shape in the early 18th century. The temple is most noted for its gold-plated roofs and silver-coated doors. Sadhus and sages, who follow the lifestyle of Lord Shiva, are seen covered with ashes and loincloths. The banks of the river Bagmati, is also considered one of the most holiest places in which to get cremated and cremations can be witnessed here. All tourists are requested that respect is shown for the grieving. Later, Proceed to Patan city for sightseeing tour.

Patan city: Nowhere else can be seen such a collection of marvellous monuments within a limited space like in the Patan Durbar Square. Besides the old royal palace, which dominates all others in grace and grandeur, here is the 17th-century Krishna temple. Entirely made of stone, this shikhara-style structure with 21 pinnacles is dedicated to Lord Krishna, a savior deity in Hindu pantheon, and is equally noted for rare stone carvings on its walls, which depict various episodes of the epic wars of Ramayana and Mahabharata. Other landmarks within the Square are Tusha-hity (water spout), Sundari Chowk, Taleju Temple and the Keshav Narayan Chowk. The Hiranyavarna Mahavihar (Golden temple), Rudravarna Mahavihar and the terra-cotta temple of Mahabouddha are other highlights in the vicinity

After enjoying sumptuous breakfast, proceed to Dakshinkali temple, a temple dedicated to the goddess Kali.

Dakshinkali Temple is located 22 kilometres (14 mi) towards the southern side of Kathmandu and about 1 kilometre (0.6 mi) outside the village of Pharping, is one of the main temples of Nepal dedicated to the goddess Kali. Animal sacrifices, particularly of cockerels and uncastrated male goats, are the main way that the goddess is worshipped, and this is especially seen during the Dashain festival. Later, proceed to Bhaktapur city for sightseeing tour:

Bhaktapur city: also known as Bhadgaon or Khwopa is an ancient Newar town in the east corner of the Kathmandu Valley. It is located in Bhaktapur District of the Bagmati Zone and situated about 14 Kms to the east of Kathmandu. It is the third largest city in Kathmandu valley and was once the capital of Nepal during the great Malla Kingdom until the second half of the 15th century. Bhaktapur is listed as a World Heritage by UNESCO for its rich culture, temples, and wood, metal and stone artwork. It is the home of traditional art and architecture, historical monuments and craft works, magnificent windows, pottery and weaving industries, excellent temples, rich local customs, culture, religion, festivals, musical mystic and so on. Bhaktapur is still untouched as well as a very well preserved ancient city, which in fact, is itself a world to explore for tourists.

Later, proceed further to Sanga to visit Kailashnath Mahadev Statue which is one of the world's tallest Shiva statue.

It is the second tallest Hindu deity after Garuda Visnu Kencana Statue in Bali, Indonesia. It is situated in Sanga, on the border of the Bhaktapur and Kavrepalanchwok districts, about 20 km from Kathmandu. Designed to resemble images of the Hindu god, Lord Shiva, and seen as a marvel of Nepalese engineering, the statue's construction began in 2003 and was completed in 2010. Afterwards, drive back to Hotel. Overnight at the hotel in Kathmandu. 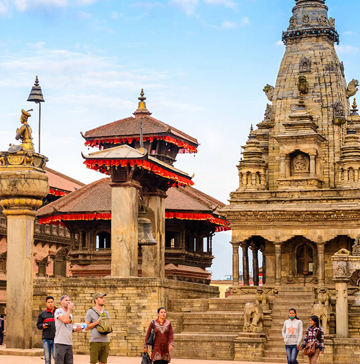 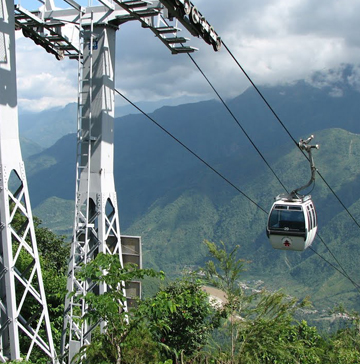 Drive to Pokhara, visit to Manokamana temple, on the way:

After having an early breakfast, drive to Pokhara. On the way at Kurintar, proceed to the cable car station, where one can take cable car for Manokamana temple. After about 10 minutes cable car ride, reach the other end of the cable car station and start walking for 10 – 15 minutes to the temple. One can have the scenic view while walking and the opportunity to indulge in the village environment.

The Manakamana Temple situated in the Gorkha district of Nepal is the sacred place of the Hindu Goddess Bhagwati, an incarnation of Parvati. The name Manokamana originates from two words, “mana” meaning heart and “kamana” meaning wish. Venerated since the 17th century, it is believed that Goddess Manakamana grants the wishes of all those who make the pilgrimage to her shrine to worship her. Let us also get your wish fulfilled by paying visit to the deity.

Afterwards, ride back to the cable car station and drive further to Pokhara. One will enjoy the scenic beauty while driving through the mountainous highway. After arrival in Pokhara, check-in at the hotel and remaining time will be at leisure to browse around on own.

Pokhara is one of the most popular tourist destinations in Nepal and is a city of about 450,000 inhabitants. It is also known as the Tourist capital of Nepal, noted for its tranquil atmosphere and the beauty of the surrounding countryside. Two out of ten highest mountains in the world namely Dhaulagiri and Annapurna can be viewed very closely from Pokhara. It is also a base for trekkers undertaking the Annapurna Circuit trek. Pokhara is considered as the only place in the world where from a height of 853 meters above sea level to the height of 6000 M can be reached within an aerial distance of 40 kms.

Due to this sharp rise in altitude the area of Pokhara has one of the highest precipitation rates of the country (over 4,000 mm/year). Even within the city there is a noticeable difference in the amount of rain between the south of the city by the lake and the north at the foot of the mountains. The climate is sub-tropical but due to the elevation the temperatures are moderate: the summer temperatures average between 25–35 °C, in winter around -2–15 °C. Upon reaching Pokhara, check-in at the hotel and remaining time can be utilized in browsing around the area.

After having an early breakfast, transfer to the airport in Pokhara to connect the flight to Jomsom, a place surrounded by the mystique mountain. Check-in at the hotel in Jomsom. Later, proceed towards, Muktinath temple.

Jomsom is a village in the Annapurna mountain region of Nepal. It is the capital of the Mustang district of the Dhaulagiri zone of Nepal. Jomsom is a popular starting/ending point for treks along the Kali Gandaki River valley as well as up to Muktinath on the Jomsom - Muktinath Trek. Both the treks can be accomplished as part of the Annapurna Circuit.

Muktinath is a sacred place for both Hindus and Buddhists located in Muktinath Valley at an altitude of 3,710 meters at the foot of the Thorong La mountain pass in Mustang. The temple is close to the village of Ranipauwa. Within Hinduism, it is called Mukti Kshetra, which literally means the "place of liberation or moksh". This temple is considered to be 106th among the available 108 premium temples considered sacred by the Sri Vaishnava sect. After the visit to the sacred temple proceed back to the hotel in Jomsom. Remaining time will be on own to take a stroll to the surroundings.

Overnight at the hotel in Jomsom. 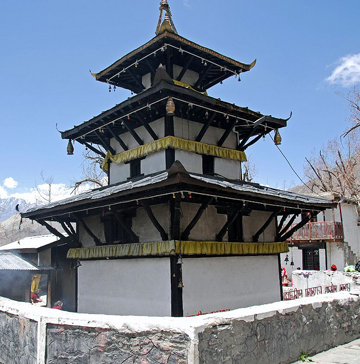 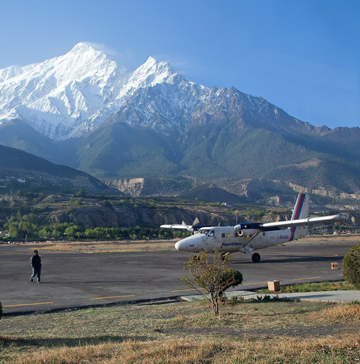 After an early breakfast, proceed to Jomsom airport to fly back to Pokhara. Transfer to the hotel in Pokhara and later, proceed to Fewa lake and boat towards the Tal Barahi temple, situated on the tiny island on Fewa Lake.

Tal Barahi Temple, also known as Lake Temple or Barahi Temple is a two-story pagoda temple. It is a hindu temple of the Goddess Durga (Barahi), the protector of gods. It is located in a small island on the south east section of Phewa Lake in Pokhara. The temple is used for worship by both Hindus and Buddhists.

Afterwards, boat back and drive towards Bindebasini temple which is situated in the Pokhara city.

Bindhyabasini temple is dedicated to the Hindu goddess Durga and is regarded as the guardian deity of Pokhara. The form of Durga residing in the Bindabasini temple is of Bhagawati, a blood-thirsty aspect of the goddess. The temple was founded in 1845 BS after the goddess ordered King Khadag Bam Malla to set up her statue there. The temple observes animal sacrifices on Saturdays and Tuesdays. Large numbers of devotees throng to the temple during the festival of Dashain. 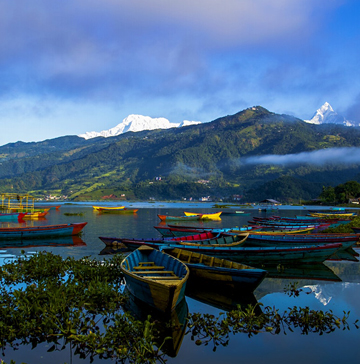 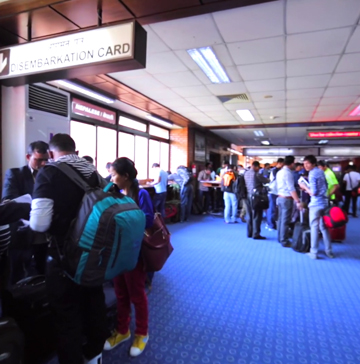 Bottled water on the way during the transfers. 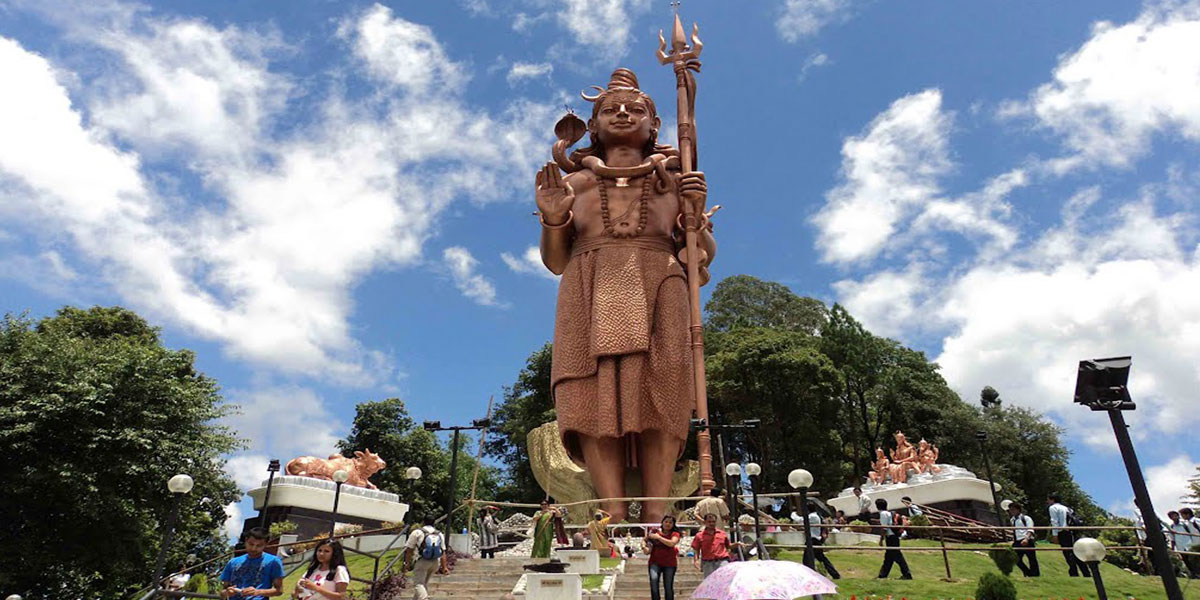 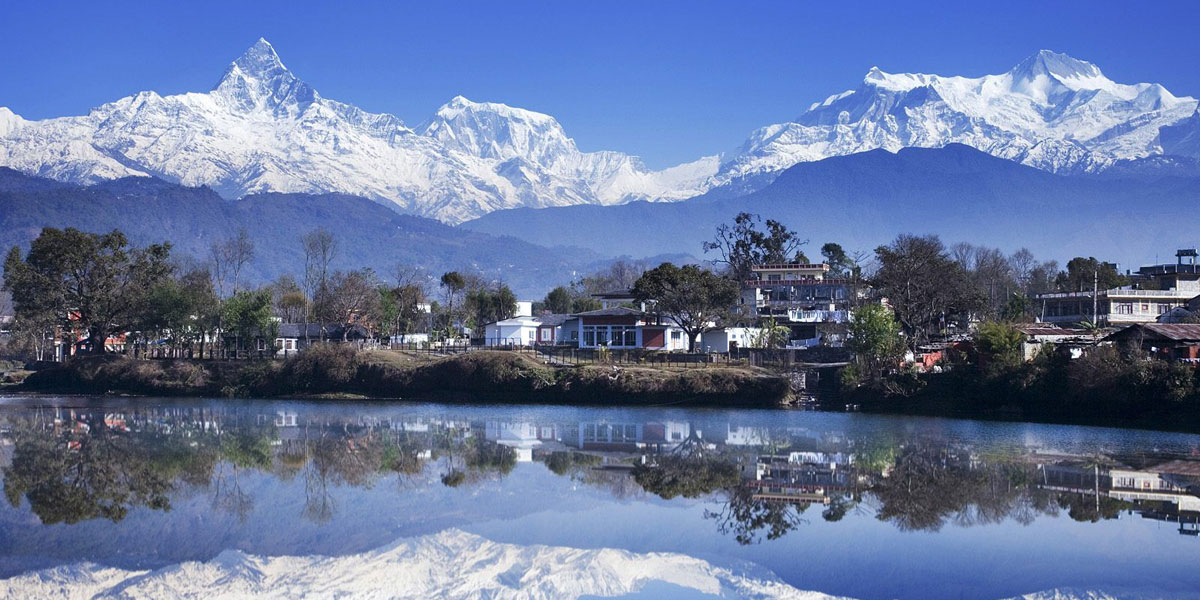 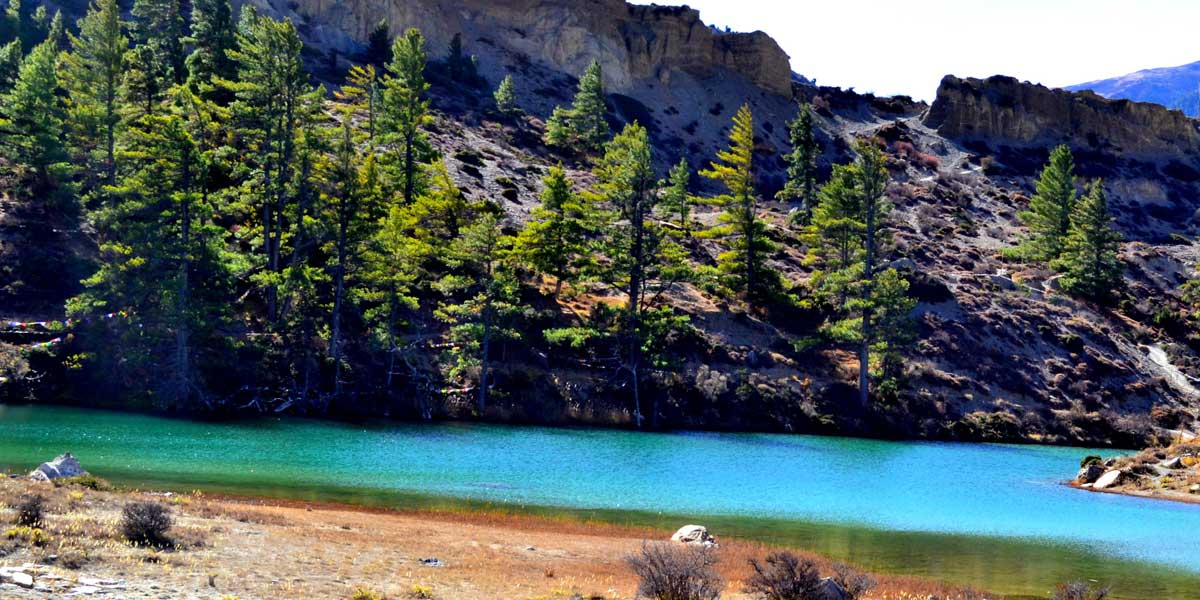